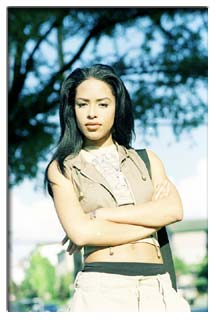 The death of soul star AALIYAH Houghton will save her movie QUEEN OF THE DAMNED (2001) from going straight to video. The vampire flick is in post-production and is described as "unwatchable. " WARNER BROS pushed the release date back to 2002, and website E! ONLINE reports that the movie was going straight to video instead of cinemas.

Aaliyah's death could mean the film will appear in cinemas after all. And though Aaliyah will appear as a vampire queen, somebody else will be talking for her. The day after her plane went down (26AUG01), Aaliyah was due to fly to Los Angeles to loop her dialogue with New York speech therapist SAM CHWAT, who was helping her with an Egyptian accent.

A spokesman for the film studio says, "It was always on the theatrical schedule. We haven't determined the tragedy's impact on production. " (PDD/WNWCPS)10