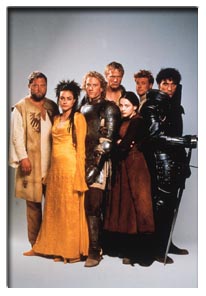 KNIGHT'S TALE, a (2001) star PAUL BETTANY has moved from a cockroach-ridden North London hellhole to a beautiful New York apartment - but he's not sure which he prefers.

The British actor was a poverty-stricken busker until he decided to give it all up and try for an acting career. He says, "When I was a busker, I lived in North London with two lesbians and five million cockroaches.The lesbians moved out and the cockroaches didn't, and I thought something better change.

So I went to drama school. Now I'm not busking any more, and I'm living in a lovely apartment in New York, and I've just bought a flat in London. People do want to talk to me. I'm not sure whether I like it, but it's a new sensation. " (BRC/INST/IG)