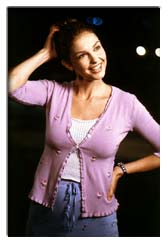 Actress ASHLEY JUDD has reportedly eloped with her fiance DARIO FRANCHITTI. The stunning KISS THE GIRLS (1997) star, 33, got engaged to the racing car driver in December 1999.

According to unnamed friends of the Californian beauty, whose famous exes include ROBERT DE NIRO and MATTHEW McCONAUGHEY, the couple have "disappeared", presumably to get married. Judd's spokeswoman had no comment. (ES/WNWE)