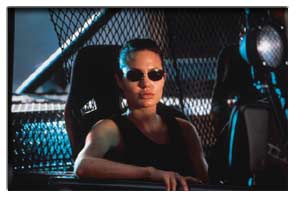 TOMB RAIDER (2001) babe ANGELINA JOLIE revealed yesterday (19AUG01) she is to reprise her role as high-kicking LARA CROFT in the sequel to the hit film.

The gorgeous actress made the announcement in London, where she stopped off on her way to visit refugee camps in Pakistan before becoming a goodwill ambassador for the UNITED NATIONS.