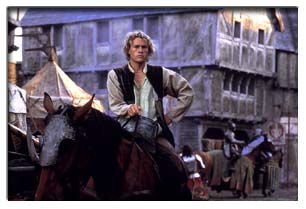 In an unprecedented move, SONY PICTURES has promised to never use fabricated reviews to promote their movies again. Two Sony executives had made up a reviewer, named DAVID MANNING, to give rave reviews to both KNIGHT'S TALE, a (2001) and ANIMAL, The (2001).

The executives were suspended, but are now both back at work. In the pact signed yesterday (13AUG01), Sony said it would either use quotes from actual reviews by professional film critics or admit that the people touting the film were studio employees.

Oregon state, America, attorney spokeswoman JAN MARGOSIAN said, "It's a basic violation of our consumer protection laws and we thought they have really gone over the line on this one. They always use puffery, but to fabricate somebody and put them up on a billboard and everything - that's going too far. "

If the studio breaks the agreement, signed in Marion County Circuit Court, Oregon, Sony could end up paying a $25,000 (£17,857) fine for each victim of marketing fraud, Margosian said. The agreement between Oregon and Sony ends the state's investigation. A spokesman for Sony Pictures Entertainment, Inc. in Culver City, California, declined to comment. (ACW/WNWCC/RP)