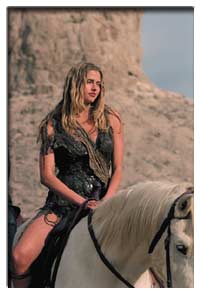 Actor MARK WAHLBERG found it hard to contain himself around sexy PLANET OF THE APES (2001) co-star ESTELLA WARREN. The Boston-bred star, who plays LEO DAVIDSON in the cult remake, wanted to see more of former CHANEL model Estella than the script allowed.

Former CALVIN KLIEN underwear model Mark says, "I understand people wanting to see me in loincloth, I wanted to see Estella's tits the whole time. It's not nice. It's not fair to her. " (ES/WNTSU)