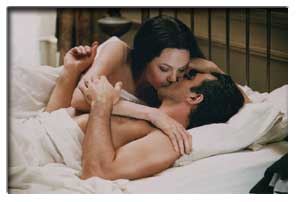 ANTONIO BANDERAS and ANGELINA JOLIE had no problems getting naked for raunchy scenes in their new movie ORIGINAL SIN (2001) - because they wanted it all to look raw and real.

Banderas, who is married to actress MELANIE GRIFFITH, and Jolie, wife of eccentric screen star BILLY BOB THORNTON, raise on-screen temperatures when they frolic together in a steamy love scene, but Banderas insists it was all just a part of the job.

Banderas, who turns 41 on Friday (10AUG01), says he wanted the moment to look as convincing as possible. He adds, "We didn't want to do that kind of love scene in which it doesn't show anything but it looks very stylish. You see an arm, and you know the arm is an arm, or is it something else?" (RGS/LA/KW)