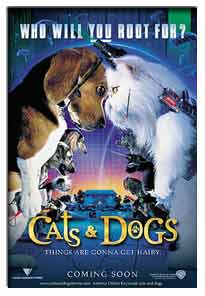 Cats and Dogs (2001), a blend of real action and computer effects about evil-talking cats who try to oust dogs as man's best friend, scooped $4. 81 million (£3. 7 million) in Britain and Ireland to debut at number one.

The film is already a smash hit in America, where it has rung up ticket sales approaching $90 million (£56 million). Actor JEFF GOLDBLUM stars as a professor who develops an antidote to man's allergies to dogs - but the cats assemble and plot to block his work. (RP/WNWR)