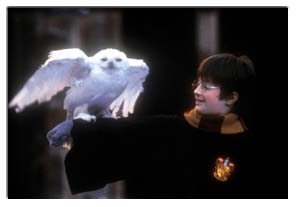 The new HARRY POTTER movie is looking likely to smash box-office records and rewrite TV history. A staggering $65 million (£50 million) for the television rights is being touted by WARNER BROS, makers of the Hollywood blockbuster.

This more than doubles the record figure earned by TITANIC (1997). The film version of J.K Rowling's HARRY POTTER AND THE SORCERER'S STONE (2001) stars DANIEL RADCLIFFE, ROBBIE COLTRANE and DAME MAGGIE SMITH, and is to be released in America on 16 November (01).

One US TV boss says, "The figure is obscene. But this movie could be the biggest ever. " (RM/WNTST/MCM)