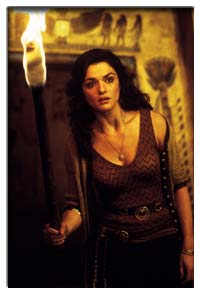 MUMMY, the (1999) star RACHEL WEISZ narrowly escaped death when the taxi she was travelling in was hit by a lorry.

Rachel, 30, was on her way back from the doctors in London, England, after pulling out of the play THE SHAPE OF THINGS with an illness said to be a cold. The dazed actress sat in the back of the wrecked taxi before slowly clambering out and standing on the pavement for 15 minutes before going to her home in nearby Primrose Hill, North London.

One onlooker said, "It was a miracle she wasn't seriously injured. Just a split second later and the lorry would have hit the back of the cab where Rachel was sitting. "

A spokesman for the actress said that she "was obviously very shocked by the accident. But please tell everyone that Rachel is fine. " (PDD/WNTMI)