Burton Struggles To Complete Apes Planet Of The Apes 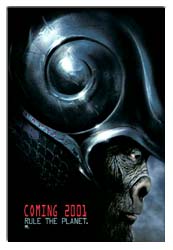 Planet Of The Apes (2001) director is struggling to complete the potential summer (01) blockbuster in time for it's scheduled release on 27 July (01).

The movie man's lavish "reimagining" of the 1968 sci-fi cult classic is undergoing major last-minute fixes, including reshoots, re-edits, CGI work, and even music tweaks, according to movie website INSIDE. COM.

"We were in the lab all weekend long," admits 20TH CENTURY FOX studio Vice Chairman BOB HARPER. "We've never done a film on this tight a schedule. Even people on the Fox lot haven't seen the film", say employees at the studio. Several exhibitor screenings have been postponed, while the press junket is to be held at the last possible moment.

According to Harper, the primary 11th-hour work is on post- production special effects - but workers on the movie reckon that as recently as two weeks ago, live-action scenes were being reshot, including the film's opening rocket-crash sequence.

Burton's composer of choice, DANNY ELFMAN, has also reportedly been asked by studio executives to make the film's music "more heroic. " One Fox employee claims, "They wanted to be able to sell the film as a sci-fi GLADIATOR (2000). " (KW/WNWCMOV))