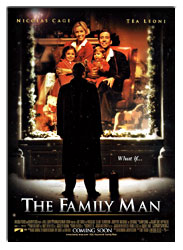 Téa Leoni has blasted the marketing men behind her Christmas movie flop FAMILY MAN, The (2000) because they delayed the release and put the film up against blockbuster CAST AWAY (2000).

The actress is fiercely proud of the film, in which she stars as NICOLAS CAGE's wife, but insists it fared badly at the cinema because it was marketed terribly. She hopes it fares better now it has been released on video in America.

"We were going to originally come out early in December (00), then all these other big movies started showing up a and we wanted our own weekend, and we ended up on the same weekend with Cast Away. I just wanted people to see it because it was such a good film and we worked hard on it and I was proud of it. I loved Nic, I thought he did a bang on job in it and it's hard to get people to go to cinema to see these little extraordinary films. " (KL/WN/KMW)