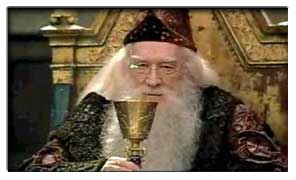 The original front cover of harry Potter and the Sorcerer's Stone (2001) is being auctioned. The artwork is a 1977 watercolour by THOMAS TAYLOR and contains far more detail than seen on the first Harry Potter book.

It is expected to fetch about £25,000 ($32,500) at London auctioneers SOTHEBY'S. J.K ROWLING, who wrote the Harry Potter books, said the image had a unique status and played an important role in the public perception of the character. (PDD/WNWR)