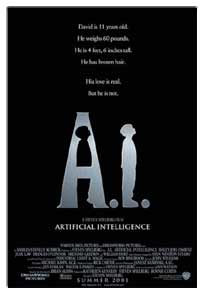 Fantasy movie a.i.: Artificial Intelligence (2001) has been knocked off the top spot in the American box office charts after just one week. The STEVEN SPIELBERG film is now in third place, with comedy CATS AND DOGS (2001), which took a gross of $9 million (£6. 92 million), at number one.