Anne Robinson's The Squawk Of Hollywood 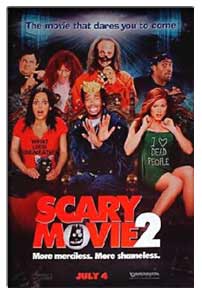 QUEEN OF MEAN ANNE ROBINSON is becoming the squawk of Hollywood - she's being parodied by a parrot in SCARY MOVIE II (2001).

The flick - a gross-out horror spoof - is expected to be a huge success in America - it was released this week (ends06JUL01).

Robinson - known to Americans as THE BRITISH BITCH - is portrayed in the movie by a crude talking parrot uttering the immortal words, "You are the weakest link, goodbye".

One of the film's stars, MARLON WAYANS, can't get enough of the hatchet-faced Brit, explaining, "I like her. The Weakest Link is such a popular thing now in the United States, so we decided to do it."

"Plus, she has a really nice ass. I don't know if you guys see
it, but if you raise the cloak, 'KA-POW!" BBC movie critic TOM BROOK believes Robinson should be flattered by the send-up, saying, "Although the film is quite coarse about her, it really is flattery for her to be included, and it does show how much she's become a part of American pop culture.So she should be pleased she's in there with all this rudeness and crudeness."