Freeman Urges Blacks to Stop Crying Racism and Get Tolerant 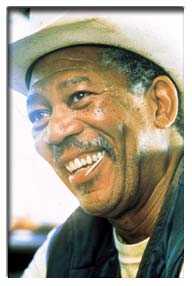 Movie star MORGAN FREEMAN is urging his fellow black Americans to stop complaining about racism - because it's no longer an issue.

The ALONG CAME A SPIDER (2001) star used Independence Day (4JUL) 2001 to air his views about modern day America, before he appeared in a special reading of the original Declaration of Independence on TV last night (04JUL01).

He says, "I read in a novel that a woman from Korea was saying, 'You don't have racism, we practise a Mao form of intolerance', and I believe that."

Freeman admits he's a big fan of THOMAS JEFFERSON's original
Declaration text. He says, "What he wrote is not what we got. He wrote that slavery is an affront against humanity. Congress eliminated that."Jefferson and I could sit down and have a really deep conversation. We're still trying to live up to his ideals today."
(KL/WNV/PDD)