George Of The Jungle Star Has 6mths To Live 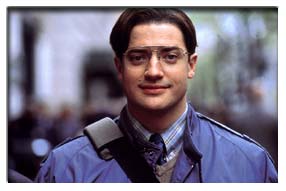 BONGO, the lion who starred opposite BRENDAN FRASER in GEORGE OF THE JUNGLE (1997), has been given just six months to live.

The large cat and movie star is dying from a rare form of incurable feline cancer. MICHAEL HACKENBERGER, Bongo's trainer at the BOWMANVILLE ZOOLOGICAL PARK in Canada, says, "I've reconciled myself to the sad fact that there will never be another like him. "

Hackenberger calls 14-year-old Bongo, who has starred in countless TV ads and 15 movies, Hollywood's greatest lion of all time. He adds, "He's safe, honest, noble, gentle, affectionate, curious and incredibly intelligent. Just a remarkable animal. Hackenberger and his vet wife DR WENDY KORVER, 39, have decided to let Bongo enjoy the company of a lioness named GRACIE for the remainder of his days, and hope will the pair mate.

Hackenberger explains, "One day, if I'm lucky, I'l get to work with Bongo's son. Nothing would give me more pleasure. " (RGS/TS/KW)