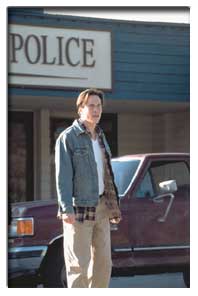 CHRIS KLEIN was excited about appearing in AMERICAn PIE 2 (2001) because it reminded him of his teenage years.

The sexy actor, who can also be seen in the upcoming sequel to the teen angst-ridden comedy, says that like the characters, he enjoyed messing around and reading sexy magazines. Of his teen years, Chris recalls, "Your body is saying things it's never said before. Girls are growing breasts, and you're going, 'Wow!' You start looking at nudie magazines and you're just going crazy! There's a lot of peer pressure at that time and you also put pressure on yourself at that age. You start questioning yourself physically and emotionally, 'Why can JIM get sex and I can't? What's wrong with me? I want a girlfriend. I don't want to play with her in the sandbox. I want to play with her in bed!'"

But something Chris wouldn't like to be reminded of is his most humiliating experience - throwing up in front of his school friends. He adds, "When I was 13 years old, my dad got transferred from Chicago to Omaha. It was the second day of seventh grade, and I didn't know what to expect. I was so nervous and I walked into the commissary dining room and threw up in front of everybody. I was mortified. " (RP/STA/KW)