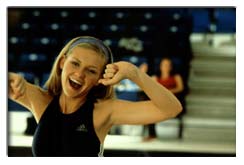 The 19-year-old demanded changes from the film CRAZY/ BEAUTIFUL (2001) after seeing it with her mother.

Director JOHN STOCKWELL said, "I think her mum was a bit taken aback. Kirsten felt a little uncomfortable about too much attention on the nudity in her first sexual movie. "

He cut the scene in half, erasing all traces of nudity, and finally got Dunst's approval. The actress, who at 13 had to kiss Brad Pitt in INTERVIEW WITH the VAMPIRE (1994), is currently filming SPIDER-MAN (2002) opposite TOBeY MaGUIRE. (ACW/WNTST/PDD)