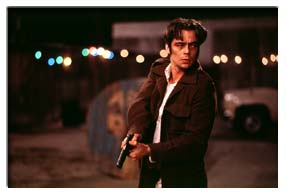 Oscar-winning actor BENICIO DEL TORO has broken his wrist on the set of his new film.

Del Toro is currently working on with EXORCIST, the (1973) director WILLIAM FRIEDKIN.

The film's producers say the Puerto-Rican born star only has five scenes left to film, which will be completed when he recovers. Del Toro, 34, won this year's BEST SUPPORTING ACTOR OSCAR for his role in TRAFFIC (2000). (MCM/WNWCAN)