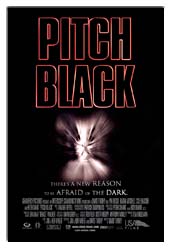 PITCH BLACK (2000) star VIN DIESEL is co-writing a sequel to the sci-fi movie.

The actor has revealed he and Pitch Black director DAVID TWOHY are penning a script based entirely around Diesel's convict character RIDDICK. He says, "We should have a script in the next few weeks or month. "

The first Pitch Black film followed a group of space travellers who crash land on a strange planet, only to discover when the lights go down, the bugs come out. The group's only hope of survival is a dangerous convict (Diesel) whose eyeballs have been adapted for night vision.

Diesel says the sequel will be completely different to its predecessor, commenting, "it will not be another 'Pitch Black' situation. " Instead "we're going to follow Riddick through this universe, more like a futuristic CONAN, coupled with a HARRISON FORD attitude and Star WARS. " (RP/WNWCPO/KMW)