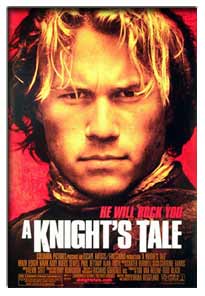 SONY have admitted inventing a film reviewer who gave positive reviews to a string of films made by the company's COLUMBIA FILMS offshoot.

Film critic DAVID MANNING had been a consistent booster for the company - but the fake film critic was discovered after reviews for Animal, The (2001) and Knight's Tale, A (2001) were challenged by a reporter for America's NEWSWEEK magazine.

The Manning blurb on Animal, The (2001) called the movie "another winner!", while comments about Knight's Tale, A (2001) praised HEATH LEDGER as "this year's hottest new star!"

Sony spokeswoman SUSAN TICK says, "It was a case of incredibly bad judgment. We're taking all the steps necessary to determine who's been responsible and will act appropriately. "

In the ads, "David Manning" was listed as a reviewer for THE RIDGEFIELD PRESS, a small weekly newspaper in Connecticut, USA. The newspaper was unaware that its name was being used in the ads, Newsweek reported. (MCM/WNWCFU)