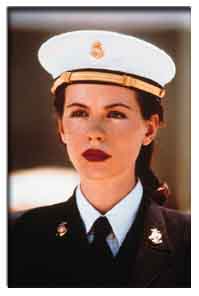 Becknisale's new war epic movie PEARL HARBOR (2001) is expected to help launch her as an international star in the same way that TITANIC (1997) helped Winslet. But she says the only comparison that should be made between her and the QUILLS (2000) star is that they share the same name.

She says, "Most actresses seem to be called Kate nowadays. I don't know, I suppose we're both in a big movie where a ship sinks. " (RP/WNWCAN)