Moulin Rouge Director Admits It May Be 'Too Much For Some' 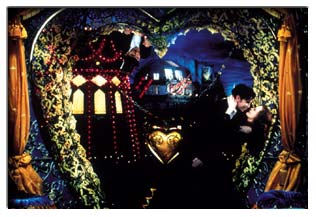 Director BAZ LUHRMANN is prepared fro criticism of his new film - because it's far too weird fro some people.

New film MOULIN ROUGE (2001), which stars NICOLE KIDMAN and EWAN McGREGOR, is a musical set in 19th century Paris - and features contemporary songs. Luhrmann says, "It might be too much for some. But it does get more classical as it goes along.

Hopefully, the audience will surrender to the contract I've prepared and just let it happen to them. " He says the film also has a healthy sense of irony, adding, "If one is to look at YOUR SONG, you understand that it is a great song, but it's also very cheesy, and could be played very easily in a piano bar. "I guess you could say in Moulin Rouge we celebrate the coolness in cheesiness. " (NFA/WNWCAN)