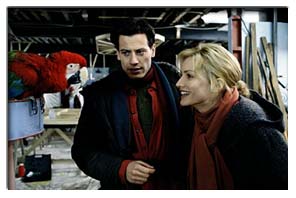 Welsh actors IOAN GRUFFUDD and MATTHEW RHYS are the best of friends - but admit they were arch enemies as kids.

At school the VERY ANNIE MARY (2000) pair would have snowball fights and once Matthew kicked Ioan, making him cry.

Matthew says, "It was Class 6 versus Class 7, so I'd have been eight and Ioan nine. Ioan's lot ran at us and threw a lot of snowballs, before running off, I went after him and kicked his legs from under him. "He fell to the ground and started to cry, and I was really worried because I thought I'd hurt him and I'd get into trouble. "

Ioan recalls, "I can remember crying when Matthew tackled me during the school snowball fight in the winter of 1982. I think they were tears of embarrassment more than anything because I'd been beaten up by an eight-year-old! "I didn't grass tell teachers him up though, so he didn't get into trouble. " (RP/WNSINS/ES)