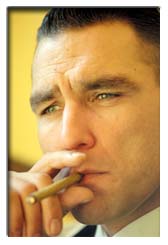 Soccer hardman-turned-actor VINNIE JONES has been throwing his weight around - having other actors tossed off films when they disagree with him.

Another actor quickly reshot Mitchell's scenes after Vinnie, in his first lead role, complained about his behaviour on set. An pal of the irate star reveals, "Vinnie was not impressed. " (TM/WNTST/NFA)