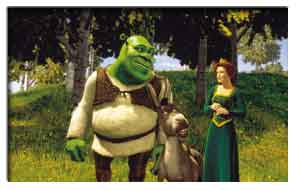 SHREK (2001) director JEFFREY KATZENBERG had an unpleasant experience during the screening of his new animated movie at this year's (01) CANNES FILM FESTIVAL - nobody laughed at the jokes.

During the official screening of the picture, which features CAMERON DIAZ, EDDIE MURPHY and MIKE MYERS, Katzenberg sat cringing in his seat as he became aware that nobody was finding his comedy even slightly amusing.

He explains, "For the first 10 minutes, nothing. My heart was thumping, my forehead was breaking out in sweat. I said to myself, 'They're going to burn the place down. ' "What I didn't realise was that the movie was playing in the original version with French subtitles and three-quarters of the audience was French. "

To Katzenberg's joy - and relief - the audience soon got the hang of things and the applause started flowing. (RGS/LADN/PDD)