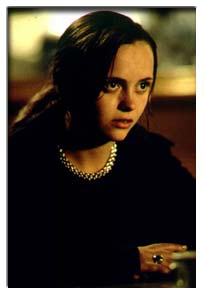 Actress CHRISTINA RICCI has slammed producers who send her violent and degrading film scripts as 'disgusting'. MAN WHO CRIED, THE (2000)star was furious when she received an offer to star in a sex-soaked epic of a drunken rape. Christina says, "I recently got a script where in the first scene this college girl is getting wasted deciding to have sex for the first time with this boy she likes. But then he ends up with someone else and she's so drunk another guy takes her up to a room. She comes out of a blackout and she's been raped by two different guys. There's no reason for this. It's disgusting." And she adds, "It only breeds contempt for other people. I don't feel any need to put myself in a position where I am representing that." (KMW/WNSSP/RP)