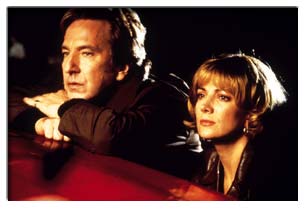 DIE HARD (1988) star ALAN RICKMAN has a way of dealing with bad reviews - he just refuses to read them. The English actor is not upset by the bad press for his new movie BLOW DRY (2001), which was made by Irish director PADDY BREATHNACH. He says, "I don't read those things at all. Although I responded to the script, I was incredibly interested in working with Paddy on the film because I'd seen I WENT DOWN and loved it. " Blow Dry (2001) suffered by comparisons with north of England-based comic melodramas BRASSED OFF (1996) and FULL MONTY, THE (1997). Rickman adds, "Genre is a very dangerous word. I remember making AN AWFULLY BIG ADVENTURE in Dublin in the wake of FOUR WEDDINGS AND A FUNERAL (1994). "Because MIKE NEWELL directed it and HUGH GRANT was in it, everybody thought they were going to see Four Weddings and a Funeral (1994) again. As if Mike would be interested in doing it twice. " (RXT/IT/MCM)