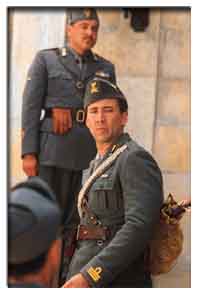 Hollywood superstar NICOLAS CAGE took his role as an Italian soldier based in Greece in the new blockbuster CAPTAIN CORELLI'S MANDOLIN (2001) because his grandfather was Italian. Cage plays the sweet-talking, mandolin-playing CAPTAIN CORELLI in the film, which also stars Penélope Cruz and JOHN HURT. He says, "I just felt that this role was in some way a connection with my grandfather CARMINE. That sounds pretty corny I know, but I did feel his presence at times while shooting the film. Maybe it was the sun, the beautiful location, or maybe even just my beautiful co-star (Cruz), but I just got really caught up in this character." (RXT/SBP/KW)