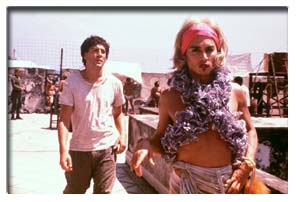 BEFORE NIGHT FALLS (2000) starring JOHNNY DEPP has been condemned by both supporters and opponents of Communist FIDEL CASTRO's regime. The film tells how REINALDO ARENAS, who claims to have had sex with 5,000 men by the time he was 25, fell foul of the authorities and ended up being imprisoned for his flamboyant sexuality. Arenas was initially a hero of the revolution that freed Cuba in 1959. The film's director says, "I am not gay or a Cuban, I simply wanted to make a film about an artist whose work and life combined the more brutal aspects of his nature as well as the more beautiful. His gift both blessed and cursed him. " (KMW/WNBGU/RP)