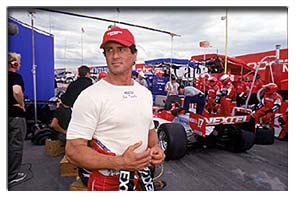 Actor SYLVESTER STALLONE is celebrating the box office success of his new movie DRIVEN (2001) by splashing out on gifts for wife JENNIFER FLAVIN. Stallone, who is currently working in the Canadian city of Toronto with MADELEINE STOWE on AVENGING ANGELO (2001), has also had congratulatory calls from UNIVERSAL STUDIOS chief RON MEYER, the actor's agent of 14 years. The ROCKY (1976) star's last number one movie was COPLAND in 1997. (RGS/U/ES)