No Sex Please For Planet Of The Apes 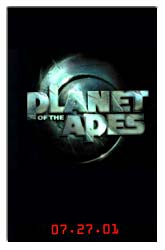 Makers of the movie PLANET OF THE APES (2001) have decided against any cross-species love scenes - because censors feel it would be like bestiality.

The scene was to take place after Wahlberg and the she-ape escaped to the film's desolate Forbidden Zone. But executives at movie studio FOX, which is producing the film, said no to any kind of inter-species romance - because it would be sure to upset movie watchdogs.

A movie source says, "Fox thought American audiences would recoil and that the movie would get an NC-17 rating. That would kill the movie for kids." (SVD/WNWC/NFA)