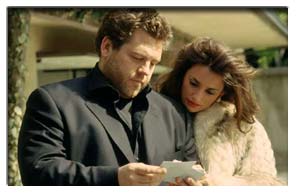 BLOW (2001) director TED DEMME and producer DENIS LEARY are to screen a private viewing of their film for a convicted drug trafficker.

The movie-making pair are taking a copy of their new film up to OTISVILLE FEDERAL CORRECTIONAL INSTITUTE in New York to enjoy a private view with its subject GEORGE JUNG.

Jung, one of America's most infamous drug traffickers and the man who takes credit for inventing the American cocaine market and Colombian connection in the late 70s and 80s, is played in the movie by JOHNNY DEPP.

And now Demme, who directed Depp in the movie, wants Jung to see exactly how they handled his life story. "It's just me and George, and the warden and Denis," says Demme, who's been a friend of the 64-year-old prisoner since he and Leary first visited him in prison in 1994, after Leary read his story in the book BLOW. (LE/U/KW)