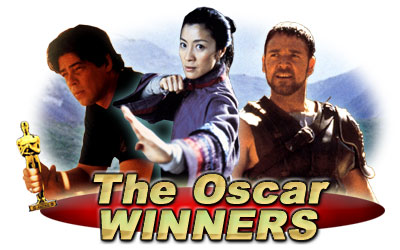 Also riding high were ANG LEE's CROUCHING TIGER, HIDDEN DRAGON (2000) and TRAFFIC (2000) both of which carried off four Oscars. An astonished looking Crowe thanked his uncle DAVID, who died last year (00) from cancer, and JULIA ROBERTS needed the help of boyfriend BENJAMIN BRATT to get up the steps in her dress to collect her BEST ACTRESS Oscar.

Ignoring this year's challenge that the shortest speech wins a television, a delighted Roberts told the crowd, "I already have a television so I'm just going to keep on going"

Roberts proceeded to thank director STEVEN SODERBERGH, boyfriend BENJAMIN BRATT and "anyone I've ever met in my life," and ended by telling the audience, "I love the world, I'm so happy - thank you!"

Soderbergh then went on to both win and lose as he carried off an BEST DIRECTOR Oscar for TRAFFIC (2000) after having being nominated twice in the category.

Aside from the winners, the evening was packed with memorable moments, which included presenter KEVIN SPACEY thanking DAME JUDI DENCH for conveying his tuxedo from their set in Canada and STEVE MARTIN running into the audience to present DANNY DeVITO with "some dip" when he started eating a carrot during Bob Dylan's satellite performance.

Best Documentary Feature: Into The Arms Of Strangers: Stories of the Kindertransport (2000)