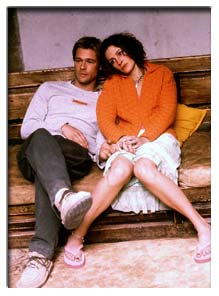 Locals in a small Mexican village are thankful to JULIA ROBERTS and BRAD PITT - for getting them phone access.

The Hollywood stars filmed their new movie THE MEXICAN (2001) in the tiny village of Real de Catorce, which at the time of filming had no phones - but now residents are elated with their new and improved communications link.

PETRA PUENTE, of the MESON DE ABUNDANCIA hotel, says, "We were waiting for 15 or 20 years. Once they arrived, there was service within a week." Real de Catorce has a population of 1,200 and was once a rich 18th-century silver-mining town in Mexico's north-central highlands, which has long attracted pilgrims to its autumn FESTIVAL OF SAN FRANCISCO.

With the movie's release, locals predict an influx of tourists. Already, the RUINAS DEL REAL, the two-year-old hilltop hotel where Roberts stayed during filming, is advertising her suite for $360 (£240) - even though regular rooms go for around $50 (£33). At Puente's 19th century establishment, where Pitt dined on guacamole and chicken fajitas, the rate is about $45 (£30). (RGS/U/CPT)