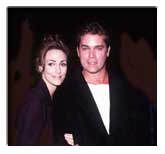 Actor RAY LIOTTA was disgusted when he saw the gore in hit movie HANNIBAL (2001) - even though he features in the bloodiest scene.

The Goodfellas (1990) actor, who has his brain eaten in the cannibalistic film, was stunned when he saw the $70,000 (£46,600) chicken-filled animatronic replica of his head being ripped from his shoulders on screen.

He explains, "I was up with JULIANNE MOORE watching me work with (SIR) ANTHONY HOPKINS and when they took off the head, it was creepy, it was funny, it was gross!" But the American star refused to let the gore factor deter him from pursuing a role in the film. He says, "I thought this is something I definitely want to be a part of - just to work with RIDLEY SCOTT (director), to work with Anthony Hopkins, who I've always liked." (RGS/WNV/CPT)