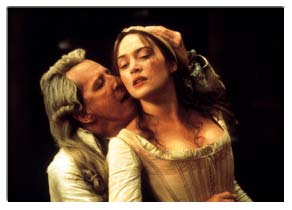 Raunchy sex scenes from QUILLS have been removed from the film's website, after complaints from concerned American parents.

The creators of the website for the KATE WINSLET film, which also stars GEOFFREY RUSH as the movie's subject the MARQUIS DE SADE, says the ban is in direct contradiction to the moral of the project.

Website creator ANDREW CHAPMAN says, "The irony is that the movie is about how the Marquis was willing to die for his right to speak his mind without censorship." (TM/WNTST/CPT)