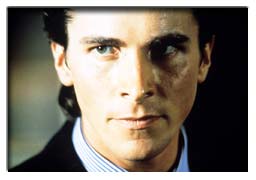 CHRISTIAN BALE was all set to give up acting because he feared he was becoming too arrogant after his early success.

The handsome AMERICAN PSYCHO star, who starred in STEVEN SPIELBERG's acclaimed EMPIRE OF THE SUN movie when he was just 13, says friends soon told him he was becoming too self-important. Bale says, "Suddenly people were saying I was cocky because I'd done a Steven Spielberg movie and thought I was better than everyone else, which surprised me at first. "I suddenly started feeling like a freak because everyone was treating me differently. It was confusing and I did wonder if acting was for me anymore."

Bale adds it took years for him to make up his mind that a career in movies was what he really wanted. He says, "I went backwards and forwards over it until I was 22. And then in the past few years I began to say to myself, 'OK, look, I'm not messing around. This is something I want to attack.'" (LE/IV/MCM)