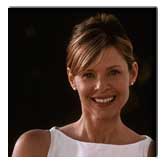 Actress KATE CAPSHAW is making sure most of her kids don't see her lesbian love scenes with supermodel-turned-actress ELLE MacPHERSON - because they won't understand.

The sexy couple make love in new TV movie A GIRL THING - and the INDIANA JONES AND THE TEMPLE OF DOOM star doesn't want four of her seven children seeing her in action. She says, "I'd be a little worried they wouldn't understand - it's not the two women kissing that would worry me, it would be the mummy naked part." Capshaw says filming the steamy scene, in which she beds Elle, did have benefits - her husband, legendary film director STEVEN SPIELBERG, got jealous. She adds, "The day we were filming that scene, we got so many phone calls from our spouses, telling us how much they loved us and asking us all these questions!" (KL/WNV/CPT)

Film Stories : Indiana Jones and the Temple of Doom (1984)