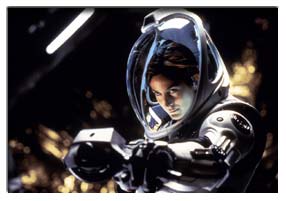 MATRIX actress CARRIE-ANN MOSS doesn't believe in American presidents - she thinks they're all robots instead.

The gorgeous ex-model, who also starred in hi-tec thriller MEMENTO, worries TV sets are all rigged and we are all being brainwashed.

She says, "Look at anything on television, look at politics. I mean, we see images of Bill Clinton being the president. We are told he is the president. But has anyone actually seen him, the flesh and blood person? "Have you ever seen him?" She adds, "Maybe he's just a computer construct."