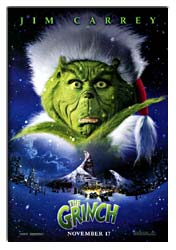 JIM CARREY's GRINCH remained No. 1 at the American box office during a record-breaking Thanksgiving weekend - defying expectations the crown would go to a new DISNEY film.

Insiders expected the wacky DR SEUSS film to be toppled by either 102 DALMATIONS or the SAMUEL L. JACKSON flick UNBREAKABLE - but THE TRUMAN SHOW star's amazing antics kept him on top, with the film earning an amazing $73.8 million (£52.6 million) for the five days beginning on Wednesday (22NOV00) - taking its 10-day total to $137.4 million (£219.84 million).