Liz: Men Are Slaves to Lust 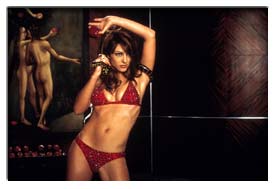 Actress ELIZABETH HURLEY uses her beauty to her best advantage - because she knows men will always be slaves to lust.

The British stunner plays the Devil in her new film BEDAZZLED - and the scantily-clad princess of darkness character seems to have given her new insight into what drives the mascualine mind.

She says, "You can have faith to move mountains, give all your money to the poor, fast for 40 days and 40 nights, but the moment a pretty girl takes her top off you'll turn into a gibbering idiot. "Women have always known that men are fatally flawed. All flesh may be weak but male flesh is a lot weaker than female flesh. It's also a lot more ridculous.

"Take strip bars. Has there ever been a better invention to fleece men? While most men start frothing at the bit the moment a woman takes her knickers off, most women laugh like drains if a man does similar. "Male nudity has always made women cackle. The thought of getting turned on and handing over vast quantities of hard-earned cash to a nude man gyrating around a pole is ridiculous. Make that a nude man pausing halfway through a backwards somersault to pull his buttocks apart and lick his lips provocatively and, I swear to god, any woman watching will be so appalled she'd need a lifetime of therapy to recover." (NFA/EQ/RGS)