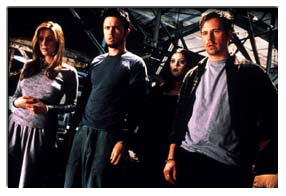 Despite the massive success of the original, the second BLAIR WITCH film has flopped on both sides of the Atlantic.

BOOK OF SHADOWS: BLAIR WITCH 2 suffered the same fate at British cinemas as it did in America, failing to top the box office chart.

It reached a lowly number three at the British box office, behind DINOSAUR and WHAT LIES BENEATH. (NFA/WNWCAN)