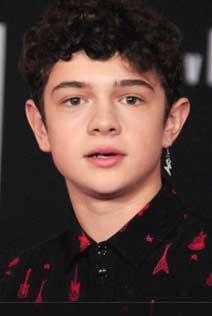 Noah Jupe and Jaeden Martell are set to lead the cast of a remake of Joel Schumacher's 1987 vampire classic "The Lost Boys" at Warner Bros. Pictures.

Though plot details are being kept under wraps, the film is said to be set in the modern day.

Jonathan Entwistle will direct with Randy McKinnon, who is working on "Static Shock" for Warner and DC, writing the new version, the studio confirmed.

The cult horror comedy starred Jason Patric and Corey Haim and was the story of two brothers who move to a California beach town and discover that it’s a haven for vampires. The film made $32.3 million on a budget of $8.5 million and spawned two sequels from the 2000s ("Lost Boys: The Tribe" and "Lost Boys: The Thirst") as well as two comic book series. The original also starred a who's who of '80s teen heartthrobs including Kiefer Sutherland, Jami Gertz, Alex Winter and Corey Feldman alongside Dianne Wiest, Barnard Hughes and Edward Herrmann.