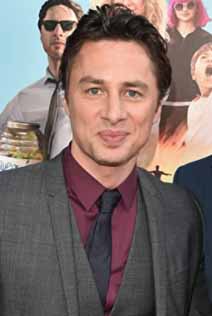 Actor-filmmaker Zach Braff has joined the cast of the sci-fi rom-com "Moonshot" being made for New Line and HBO Max.

Braff is playing the mastermind behind the effort to colonize Mars, a man who is described as an entrepreneur and a visionary.

Cole Sprouse, Lana Condor, Mason Gooding, Emily Rudd and Lukas Gage are already on the flight deck for the movie that is currently in production with Chris Winterbauer behind the camera.

Moonshot is a reunion for Braff and Berlanti more than 20 years in the making. Berlanti wrote and made his directorial debut with 2000’s The Broken Hearts Club: A Romantic Comedy which featured Braff in the ensemble.

Braff, who juggles both behind and on-camera work, recently wrapped Disney+ feature Cheaper by the Dozen and can next be seen opposite Robert DeNiro in George Gallo’s The Comeback Trail.

Braff is coming off an Emmy nomination this week for his work directing Apple’s comedy series Ted Lasso.