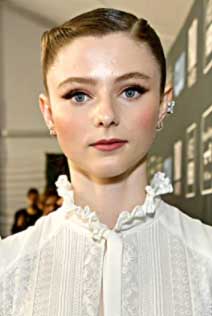 Thomasin McKenzie is set to play Kerri Strug in the upcoming Searchlight Pictures sports biopic, "Perfect", directed by Olivia Wilde. The film, written by "Borg v. McEnroe's" Ronnie Sandahl, tells the story of the US Gymnastics team during the 1996 Olympics, where Kerri Strug led the team to its first gold medal. The gymnast famously finished an event with a badly injured ankle, leading to one of the most iconic images in sports history, with Strug being held by her coach as she is unable to walk after her performance.

Wilde and Sandahl are executive produces alongside Deepak Nayar and Marisa Clifford.

Since breaking onto the scene with "Leave No Trace", Thomasin McKenzie has booked a number of lead roles in high-profile projects. She will next be seen in M. Night Shyamalan's "Old" and Edgar Wright’s "Last Night in Soho". McKenzie is currently in production on the BBC adaptation of Kate Atkinson's "Life After Life."

Filming isn’t expected to begin on "Perfect" until 2022. This makes sense, as Wilde is still putting the finishing touches on her next feature, "Don’t Worry Darling", which recently wrapped up filming. Wilde, of course, broke out as a director thanks to her acclaimed teen comedy, "Booksmart".