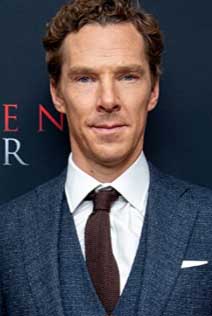 The film will cast Benedict Cumberbatch as a British soldier who uses his skills as an illusionist to fight in World War II. "War Magician" is based on a book by David Fisher and is based on the real life story of Jasper Maskelyne, who was a world famous magician in the 1930s but is best known today for his work in the war, where he claimed to create large scale ruses, camouflage and deception as a means of defeating the Nazis.

Nicholas Mariani is writing the script, based on the book by David Fisher and earlier drafts by Richard Cordiner and Gary Whitta, about the wild story of British illusionist Jasper Maskelyne who used his skill to defeat Erwin Rommel.

Benedict Cumberbatch is currently shooting the Marvel sequel Doctor Strange in the Multiverse of Madness, while his latest film The Courier opens this week

The film has been in the works for 20 years now, with Tom Cruise first showing interest and nabbing the rights to the book. Since then, it has passed through several hands including director Marc Forster, but now Trevorrow is making it his follow-up to Jurassic World: Dominion.