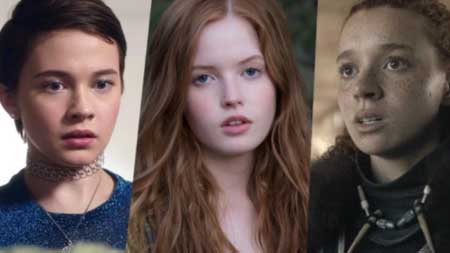 Erin Kellyman, Cailee Spaeny and Ellie Bamber are all in negotiations to star in the upcoming series based on the iconic 1980s fantasy movie Willow.

They join star Warwick Davis, who will reprise his role as the titular character.

Plot and character details are being kept under wraps, but the new series is said to take place years after the events of movie.

The movie, helmed by Oscar-winning director Ron Howard from a script by Bob Dolman, found only middling success at the box office, but has stood the test of time as a cherished, epic fantasy film, with a huge fanbase that has been thirsting for a sequel ever since.

After months of rumors, in October Lucasfilm confirmed that Willow would be reborn as a TV series for Disney+, making it Lucasfilm's first non-Star Wars story since George Lucas sold his studio to Disney in 2012.

Ron Howard is an executive producer on the project, with "Solo" writer Jonathan Kasdan and Wendy Mericle serving as showrunners.

Cailee Spaeny is probably the best known of the group, as she recently starred in Craft: Legacy, The (2020), and has appeared in Bad Times at the El Royale (2018), Pacific Rim: Uprising (2018), and "Devs". Ellie Bamber is probably most well-known from her role in Tom Ford's film, Nocturnal Animals (2016). And Erin Kellyman played Enfys Nest in Disney's own Solo: A Star Wars Story (2018), which was written by Kasdan.