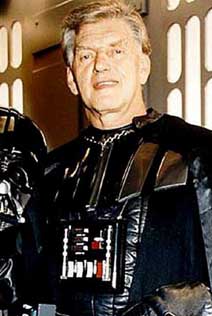 David Prowse, the British actor most widely known as the man in the Darth Vader suit in the original "Star Wars" trilogy, died on Saturday at the age of 85 after battling an illness.

Prowse died on Saturday at age 85 after suffering from an illness. Though James Earl Jones voiced the famous villain in "Star Wars", Prowse was the physical actor who portrayed Darth Vader.

In a post on StarWars.com, creator George Lucas wrote a touching tribute to Prowse.

"David brought a physicality to Darth Vader that was essential for the character," Lucas said. "He made Vader leap off the page and on to the big screen, with an imposing stature and movement performance to match the intensity and undercurrent of Vader’s presence. David was up for anything and contributed to the success of what would become a memorable, tragic figure. May he rest in peace."

Mark Hamill also posted a tribute to fellow actor David Prowse, who played Darth Vader alongside Hamill in the original Star Wars trilogy and shared one of cinema’s greatest reveals with him.

"So sad to hear David Prowse has passed. He was a kind man & much more than Darth Vader. Actor-Husband-Father-Member of the Order of the British Empire-3 time British Weightlifting Champion & Safety Icon the Green Cross Code Man. He loved his fans as much as they loved him. #Rip"

Born in 1935, Prowse was a weightlifting champion in his early days, winning the British championship in 1962 and representing England at the Commonwealth Games in Brisbane that year.

Other film roles included Frankenstein’s monster in 1967’s "Casino Royale", and again "The Horror of Frankenstein" in 1970 and "Frankenstein and the Monster from Hell" in 1974. He had a small role in Stanley Kubrick's "A Clockwork Orange" in 1971, which earned the attention of George Lucas, who reportedly auditioned Prowse for both the roles of Darth Vader and Chewbacca before Prowse eventually went to the Darkside. Because of Prowse's accent, however, the voice was performed by James Earl Jones.